This is likely to be my last post of the year, so for those of you who are still reading this in 2017, I hope you have a peaceful, relaxing holiday season and a fantastic start to 2018. If I don’t manage to post sooner, I’ll certainly do so once back in Switzerland from our 6-month round-the-world trip (I’ll be back at work on January 5th in some capacity).

We were very excited about our visit to Addo Elephant National Park. While not the Kruger, it’s certainly a large, impressive park and the most easily accessible large park for us on this particular itinerary. And being somewhat less large it also has the benefit of being easier to explore, with an increased chance of seeing animals in a shorter time period.

We arrived in Addo on the afternoon of December 17, having visited the Daniell Cheetah Project on the way from the Karoo. The weather gradually came in as we approached the park… 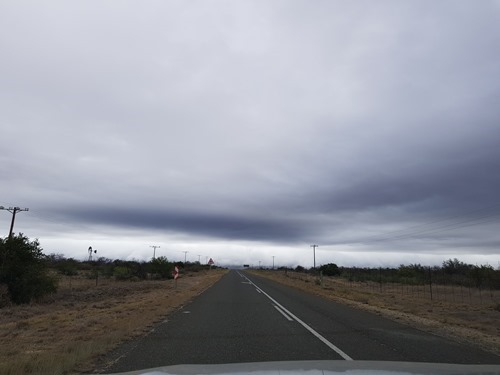 It was due to rain that day, but we weren’t sure how much. We’d been camping for three nights, already – one in Alawai North, two in Graaff-Reinet – and weren’t relishing the prospect of putting our tents up during the rain. Luckily this didn’t happen: the rain held off until we were all set up, at least.

To kick off our 2-day stay with a bang, we’d booked a “night safari” for our first evening in the park – with a guide taking us off the usual, publicly accessible tourist roads in the park – but we weren’t at all sure it would be worthwhile. When we arrived at the check-in for the drive we were warned in no uncertain terms that there were no guarantees of seeing animals, only that we’d end up getting very wet. The tour wasn’t cheap, but then we didn’t have the option of moving it to the next night: the high season in South Africa had kicked in properly and there was no availability for any tours during the remainder of our stay. The only options were to cancel (without paying, which was something) or to press on with no chance of a later refund… which I completely understand: it’s really not the guide’s fault if the weather conditions make it hard to spot wildlife. 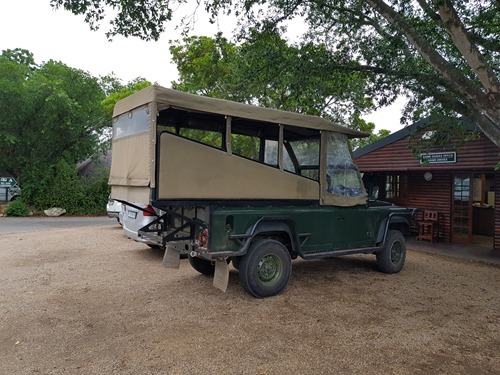 Anyway, all we could really do was don our wet weather gear and roll the dice. And I’m so glad we did.

Our guide, Ryan, had been giving tours in Addo for 37 years. He’d set the expectation low about seeing animals, so everyone was thrilled when we entered the game viewing area and – after just a few hundred metres – came across an African buffalo (also known as a Cape buffalo). It was an old bull, munching on some scrub. Despite appearances these are among the most dangerous animals in Africa. 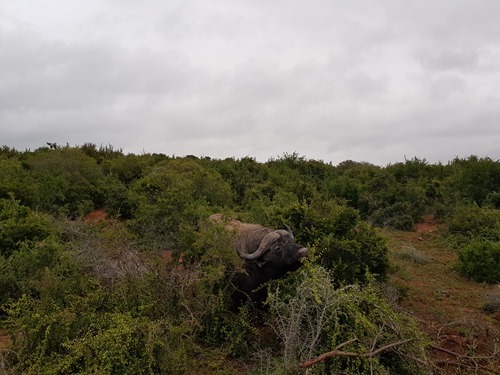 While we were admiring this impressive beast, Ryan cupped a hand to his ear and said “listen – can you hear the lion?”. I couldn’t, but he drove us off in the direction he believed it to be in… apparently in the evening the local lions occasionally spend time at one of the park’s boundaries, communicating with other lions on the other side of the barrier (there’s a road the splits the park in two). Sure enough, as we headed along this path, we saw a male lion padding along the fence towards us. Wow. 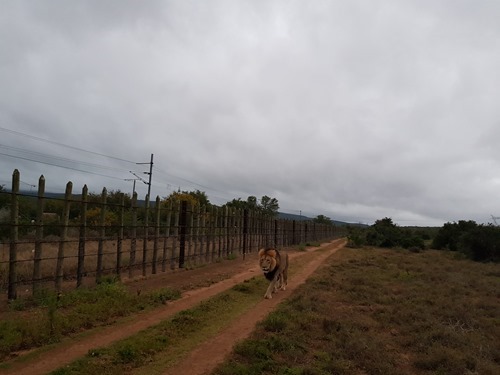 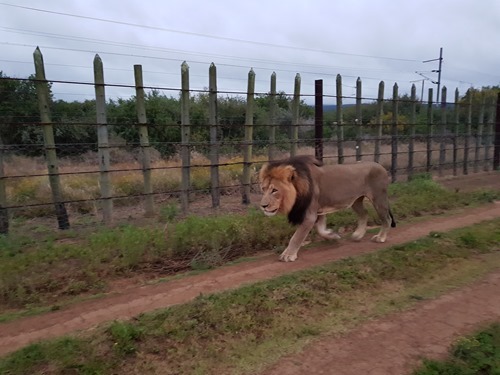 We followed this lion for a while – it drank at a watering hole (that had just previously been occupied by two blue cranes, see below) before heading into the bush. 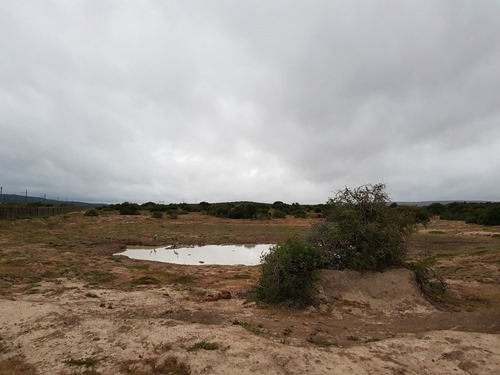 By this point we felt like we’d gotten our money’s worth (after the low expectations), but during the rest of the 2-hour safari we saw a number of other animals. The kids were delighted! 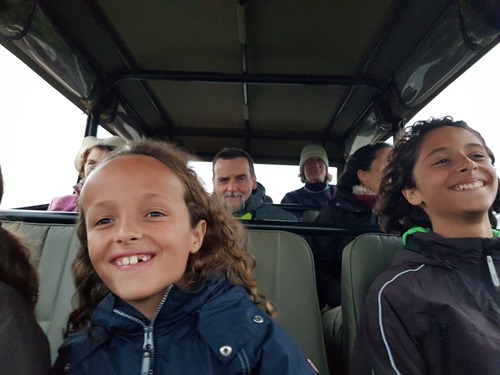 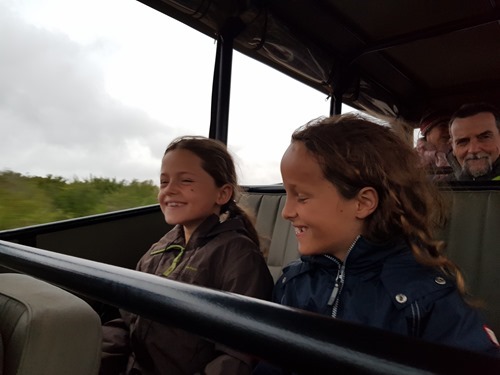 We took fewer photos once it was dark, but here’s a sampling.

Ryan’s an expert on reptiles, and so at one point jumped out and picked up a frog for people to examine. 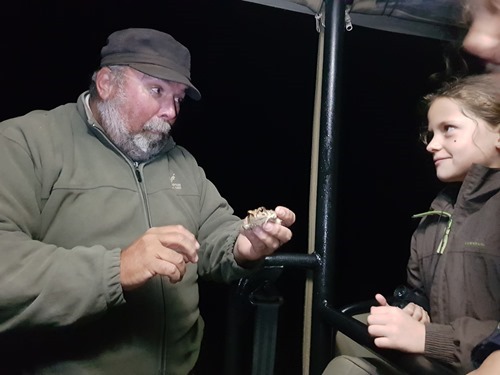 We got to see another lion! 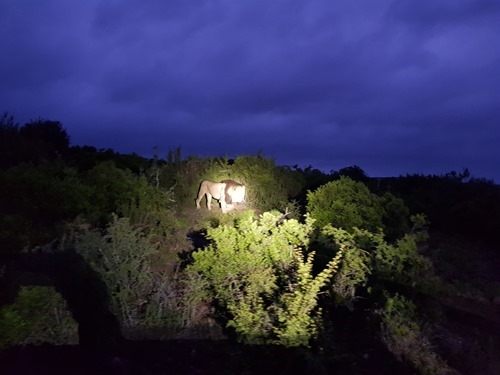 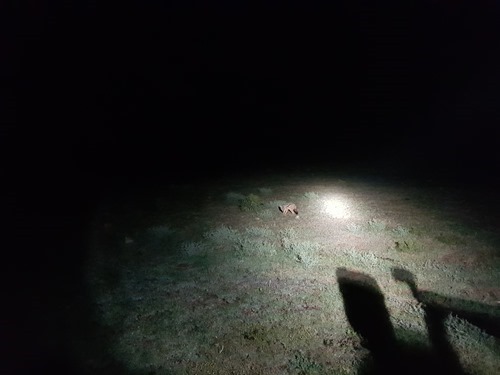 … and a family of elephants. 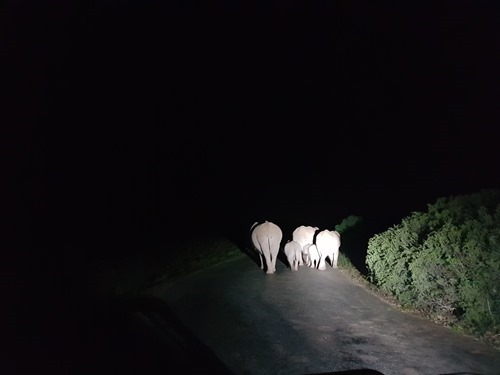 All in all it was a great start to our stay in Addo. We did end up drenched by the time we got back, but all had huge grins on our faces.

The next day also started out quite wet. Very early on we got to see a bull elephant eating by the side of the road… 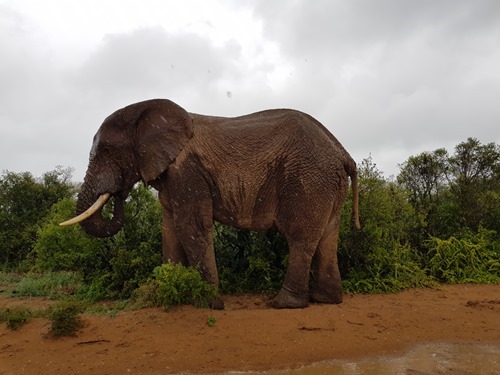 Warthogs are very common, in the park, but still nice to see. 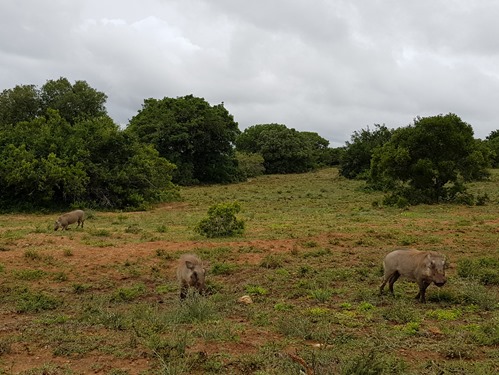 Over the course of our time in the park we saw a lot of elephants. But every time we came across them we were thrilled.

There were various grazers around, but we particularly enjoyed seeing the very elegant kudu. 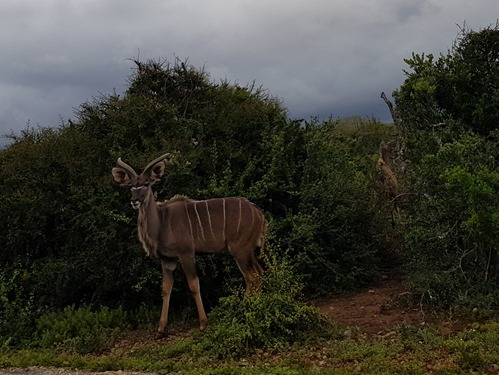 One very important species in the park is the flightless dung beetle. It’s endangered – only existing in a few areas in Southern Africa – but you see a lot of them on the road as you drive through Addo. There are signs describing the penalties for running them over, so you do need to keep your eyes on the road! 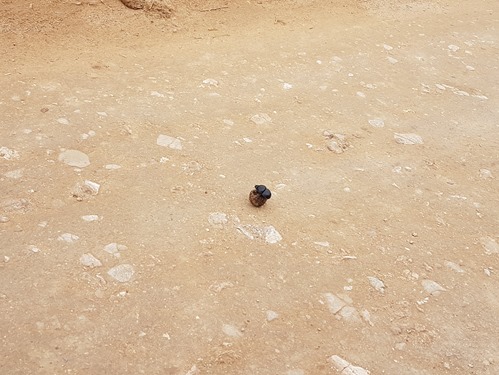 On our last day in the park we left the kids to sleep and were first to enter the park a touch before 5:30am. 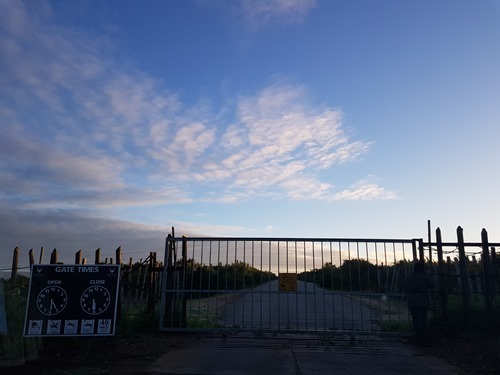 We didn’t see a huge variety of wildlife at this time – I suspect we chose the wrong areas to look – but we did see several more black-backed jackals, something you tend not to see during the day. And it was admittedly nice having a drive, just the two of us.

The weather was perfect, by this point. After packing up our tents – and collecting the kids – we headed gradually towards the southern entrance to the park. These shots were also from the northern side, where we’d been until now… 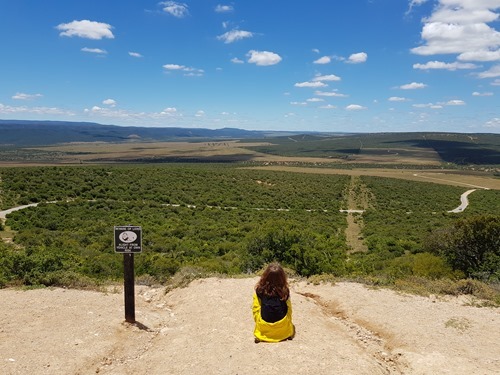 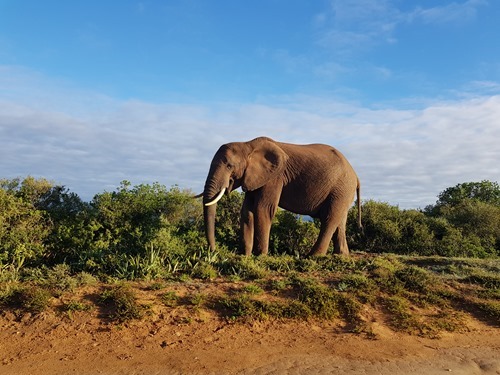 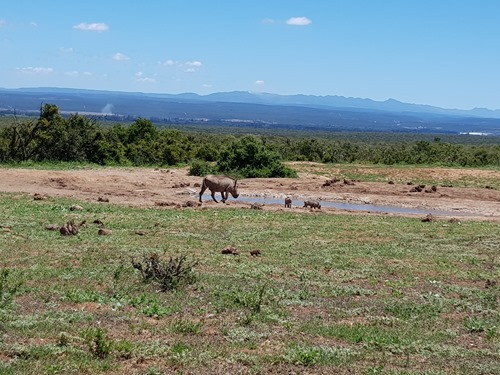 But the southern end of the park was really surprising. In many areas the landscape was really different: much hillier – which often made it harder to spot game – but there were also huge open areas with wildlife grazing everywhere. 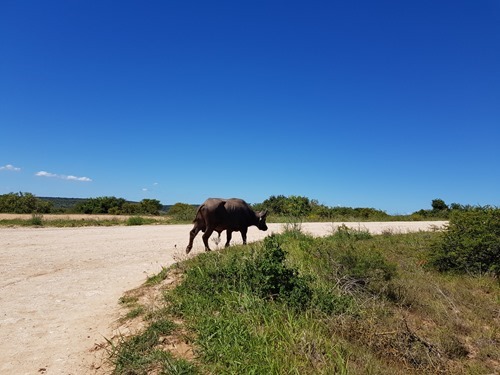 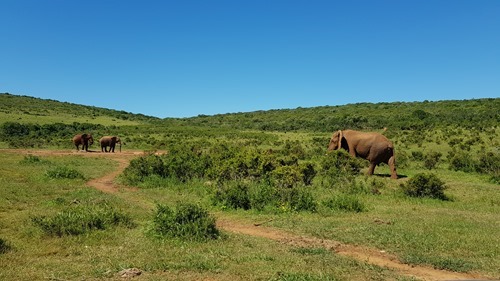 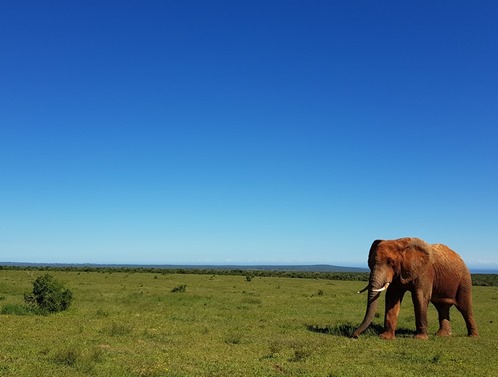 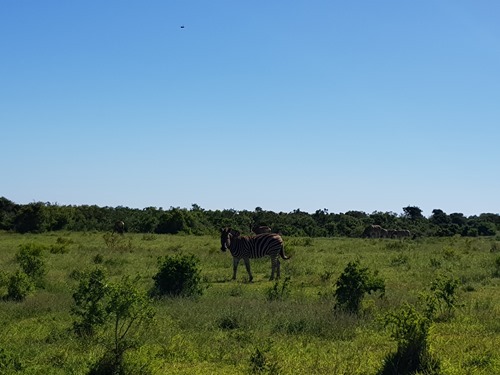 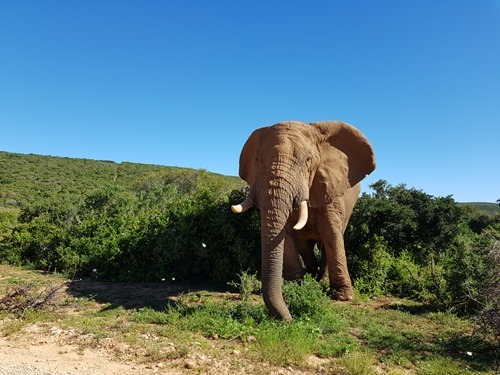 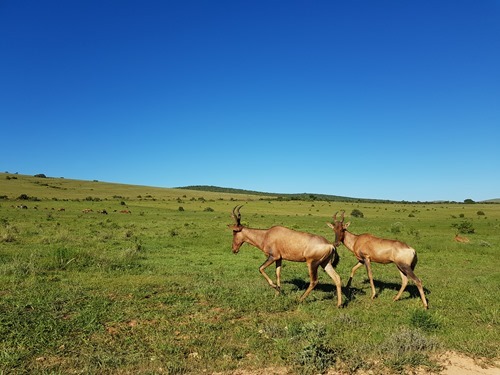 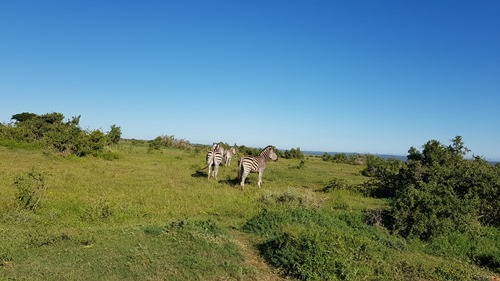 Here’s a shot of some grazing zebra we took through our binoculars. In the background you can see the sea close to Port Elizabeth – the park runs right down to it (there’s a section up against the sea from where you can view whales and sharks… hence the claim of Addo being the only place you can see the “Big 7”, which is the Big 5 plus whales and great whites). 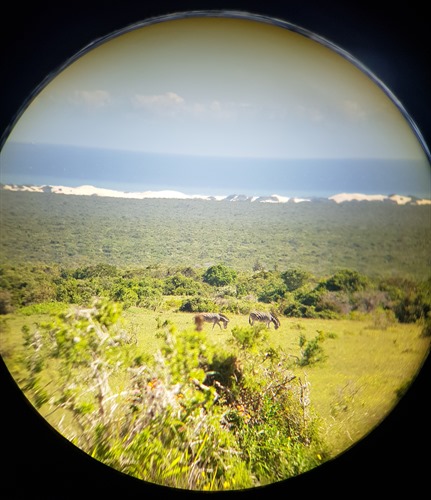 From Addo we headed to Port Elizabeth to stay with some old friends, and then onwards to Knysna to spend Christmas with family.