The first few days of our big trip

So far our big trip has gone well: the trip out via the UK went smoothly – we had a 5-hour layover at Heathrow Terminal 5, as we had to collect and re-check our bags (our ticket from Geneva was separate from the main round-the-world itinerary, it seems) – but time passes quickly in a pub when you’re eating fish and chips and sipping Guinness. Arrivals in DC were also a breeze: I’d forgotten about having to take mobile lounges at Dulles, but immigration was quick and easy. We booked an UberXL (we’re 5 people with lots of bags) which on a Sunday evening was able to get us to Foggy Bottom in a mere 30 minutes.

All in all we were very happy with the hotel – the University Inn – and its location (right next to the historic Watergate Hotel): it was a good base from which to visit the city. On our main day visiting DC we walked down to the Lincoln Memorial, walked through the National Mall to the Washington Monument, and were among the first to enter the Smithonsian National Museum of Natural History when it opened at 10am. There were lots of people in nearly no time, so we stopped for a quick lunch in the cafeteria before heading across to the Air & Space Museum for the afternoon. To give the kids a break from walking we caught an IMAX show and continued our tour before taking a bus back up Pennsylvania Avenue (with a glimpse of the White House) to Foggy Bottom, and then bought a great picnic dinner at the local Trader Joe’s.

On July 4th we had to get to Union Station for the 10:20am Amtrak to New York. Lots of roads were blocked off, probably due to the Independence Day Parade, but the driver got us there in good time. 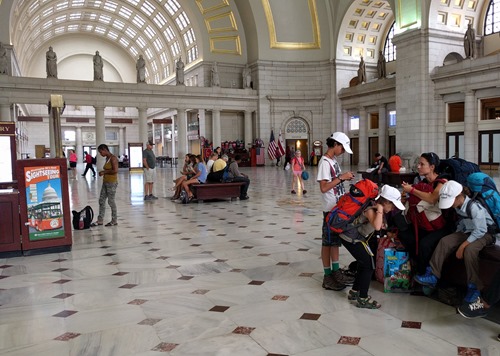 The train trip was comfortable, but on arriving in Penn Station I should really have booked a car, rather than having us take the Long Island Railroad and then the subway… too much walking with too many bags. Lesson learned. After a break at the apartment in Sunnyside we headed back into Manhattan to visit Times Square for a wander around and dinner at a Japanese restaurant. 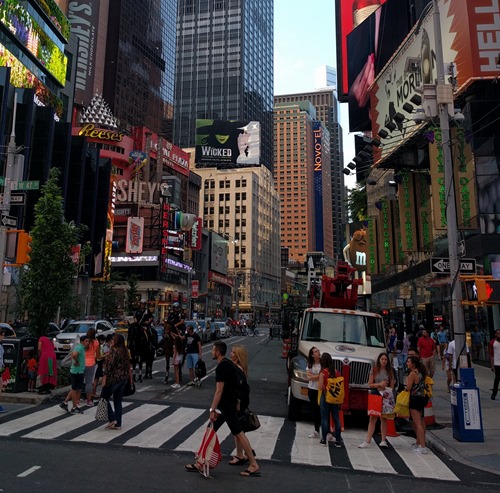 July 5th was our main day visiting NYC. For the morning we decided to take the Staten Island Ferry to see the Statue of Liberty. When we arrived on Staten Island we decided to wander around to find a place to get coffee. This was a bad idea, it turns out: I now understand why lots of people get off the ferry just to board it immediately: the area around the port is pretty sketchy. Between Times Square (which has its own share of weird) and our experience on Staten Island the kids were getting a pretty skewed view of New York. Something that needed correcting, for sure.

While waiting to take the ferry back, I heard a voice behind me say “are you Kean Walmsley?”. It was Ganesh Sethuraman: we follow each other on Twitter and had communicated a few times, over the years. He was also visiting New York on vacation with his family, and just happened to be taking the same ferry. The fact that my whole family were wearing baseball caps – given by some good friends of ours – saying “World Tour 2017 – Walmsley” had probably helped Ganesh connect the dots. It was a great piece of synchronicity, nonetheless. 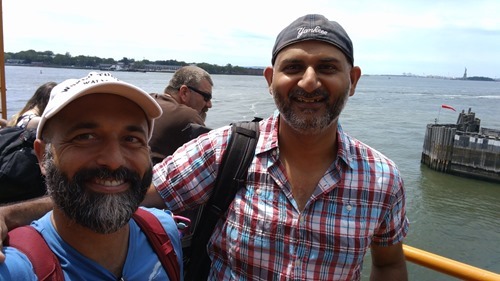 Once back on Manhattan we took the subway up to the north end of Central Park. 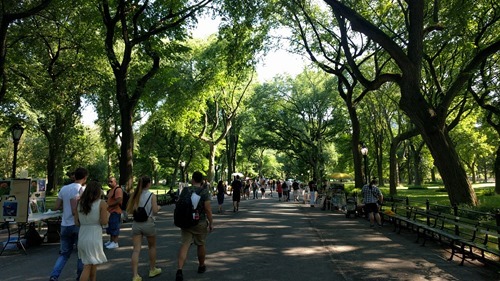 This was much more our pace, and was a really good way to recenter our impressions of the city. We walked the full length of the park during the course of the afternoon, and then found a great pizza place in Sunnyside, near the apartment. Their eggplant parmigiana slices were unbelievably good.

Today we’re slowly getting ourselves together to catch a Greyhound from New York to Hartford, Connecticut. We’ll be staying a few days with an old friend from University, which I have no doubt will be loads of fun. From there we’ll head to Toronto, where I’ll spend some time working with my colleagues in Autodesk Research (which will be a different kind of fun).