I enjoy certain aspects of camping. I won’t say it’s my favourite thing in the world, but there are things about it that I appreciate.

Here’s a quick video I recorded of our camping experience in Bryce Canyon (I’ll be talking more about this destination in a coming post):

In the US, at least, camping is really easy. Especially car camping: each site typically has its own fire pit and animal-proof storage unit (according to the local fauna – in Yellowstone it was bears, in Utah it has been either been desert foxes or organized gangs of killer squirrels). Everything is very convenient: you can usually buy firewood and ice locally, for instance. 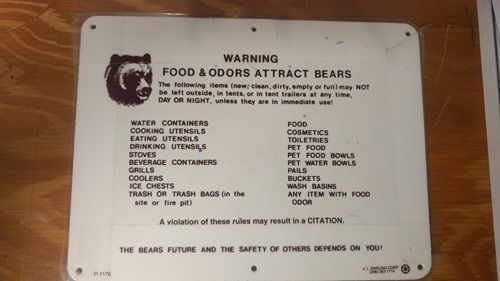 One thing I’ve found that helps me compensate for the things I dislike about camping is technology. For this trip we’ve seriously upgraded our camping tech, for instance: new tents, air mattresses, sleeping bags, sleeping bag liners, strings of LED lights…

I’ve also purchased a number of gadgets to keep the kids’ (and – yes – their parents’) phones/tablets/PCs charged. We have car chargers, both for USB and for 110V power, we have power banks and rechargeable batteries, we have a solar charger (which I haven’t yet tried – this is more for South America, when we won’t have a car in many places). I’ve also bought my favourite power-generating gadget – and one that was designed using Autodesk products – the BioLite Camp Stove. 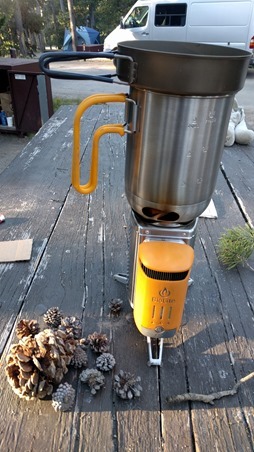 This magical device takes a modest amount of bio-mass – pine cones, twigs, bits of wood – and generates heat very efficiently (it has a fantastic built-in fan to help the fire get started and to keep it going) and uses the excess heat to generate electricity. This is either stored in a battery or fed out through a USB port to a connected device. And the battery also feeds the fan, which drives the fire… a few friends have referred to it jokingly as a perpetual-motion device, as it’s just that nifty. 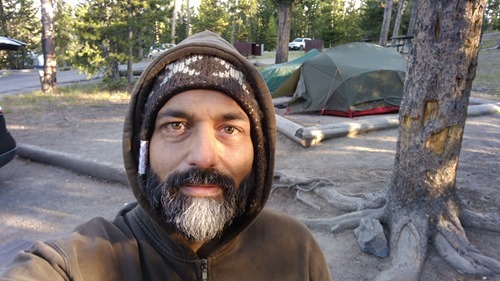 After a few cold mornings (it was colder in Yellowstone than in Utah, but still) of trying to make tea with the stove, I’ve just about mastered it. I have found it needs fairly constant attention: the stove uses relatively small amounts of fuel but it does need to be fed pretty constantly to avoid going back a step or two. That’s not such a pain, but it does change the experience you have with it. You also need to adjust the fan level quite often, depending on the fire’s state. I do expect this is the kind of detail that will eventually be automated away… and I suspect I’ll be disappointed when that day comes. I believe many campers camp as an expression of mastery over their environment: they don’t need too much automated away.

I also found that the battery drains fairly quickly if you’re trying charge a device and keep the fire going at the same time… that’s easy enough to manage, but you do need to make sure the level doesn’t go too low that the fan stops turning. Ideally it would only charge with the excess power generated by the fire – rather than what was stored in the battery – but that seems a fairly small detail. 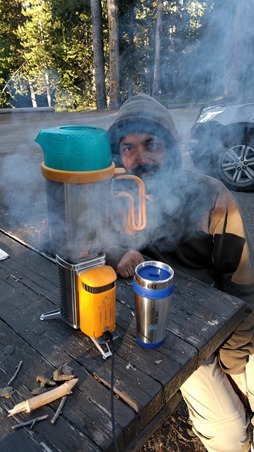 The stove isn’t super-light, but it is very well designed: the pieces all fit together nicely – the stove itself fits perfectly into the kettle it heats – when being prepared for storage or transportation. It’s really a thing of beauty.

By the time we left Dead Horse Point in Utah, we were really cooking: 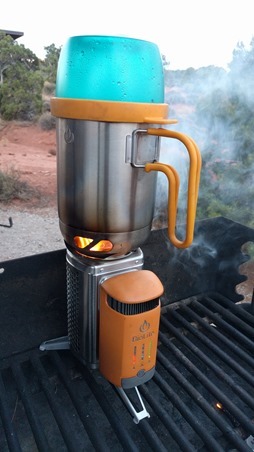 And one of the best things about the BioLite project is that it’s being used to improve the lives of people in developing countries, where dirty fires are a major cause of death.

If you’re going to invest in camp stove, do consider the BioLite. I will say that we’re not able to use it right now – in Zion National Park – as they have a ban on non-gas camping stoves… but hey. Under normal circumstances, it’s really awesome.