What’s up with Autodesk and HoloLens? 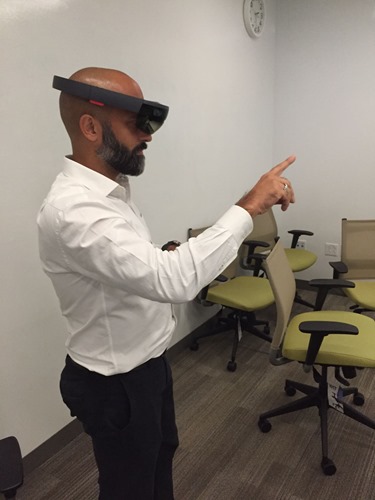 A lot of people are asking me about HoloLens at the moment. And I really do mean a lot. This is cool – people are clearly excited about the possibilities of the technology – but it also means I’m spending quite a bit of time adjusting people’s expectations about what they can do currently with HoloLens and Autodesk software.

I decided to write this blog post – describing where we are today – mainly in an attempt to answer the questions I’m receiving about HoloLens and Autodesk. If you’re visiting this post, sometime in the future, bear in mind that the information was probably only valid for a few months in the latter part of 2016. :-)

So… what’s up with Autodesk and HoloLens? Which of our tools work with it?

You may have seen promotional videos showing Fusion 360 and Maya working with HoloLens. These were early proof-of-concept integrations, and as far as I know they haven’t (as yet) resulted in anything usable by early HoloLens adopters. It’s going to be some time before that kind of product integration is available. I can’t really comment on (largely because I don’t really know about) the status of any integrations our product teams are working on, but as of today there isn’t anything you can try.

You may also have seen some of the work I’ve been doing with HoloLens. This is also prototyping work – to test out the capabilities of the platform and to understand how developers can work with it – but much of the workflow I’m using today doesn’t involve Autodesk technology. The base models are coming from CAD, of course – and have often passed through one or more Autodesk tools on their way to being animated and displayed – but the HoloLens runtime of choice is currently Unity: this is the game engine Microsoft has used for all of their samples and documentation, and so that’s what people are inevitably using.

So how do you take a CAD model and get it to display inside HoloLens? CAD geometry is typically modelled via boundary representation, whereas game engines such as Unity like to work with meshes. You can export FBX (a mesh format) from most Autodesk software, but this doesn’t automagically result in a good experience once imported into Unity: they will often be unnecessarily detailed or just look ugly. The detail problem comes from things like screw threads: if these have been modelled accurately, they’ll result in thousands upon thousands of unwanted polygons which will impact both the size of the application and its runtime performance. The offending objects will either need to be removed or simplified – perhaps using a texture to represent the thread, rather than geometry. The ugliness comes from the fact that Unity doesn’t have enough information to display the model well: things typically get better once you provide a UV mapped texture, but creating one takes time and effort.

Now I’m far from being a Unity expert – I’ve dabbled in using it, over the years, but that’s about it – so I can’t really comment on topics such as how best to optimise meshes for display inside HoloLens. The point is really that this isn’t currently a simple export-import process: it can take a lot of work to get models across.

This is exactly the use-case that has led to us creating Autodesk LIVE, which simplifies the process of generating Stingray scenes from Revit models. While this doesn’t help us today – because HoloLens uses Unity and LIVE targets Stingray – at some point I expect it to become a viable option. Especially if there continues to be such strong interest in HoloLens and its competitors.

Hopefully this has gone some way to answering questions you might have about the use of Autodesk tools with HoloLens in the autumn of 2016. The situation will certainly evolve over the coming months, so please watch this space.

In related news, I now (temporarily) have two HoloLens devices in my possession – the one I’ve been using, until now, was on loan from the Forge team and I just picked one up for my own dedicated use when in Toronto – which makes this an ideal time to start investigating sharing of holograms. This will make demos both easier and more compelling, with any luck.