After managing to get HoloLens working properly, yesterday I dove right into the Holograms 101 tutorial. There are two versions of this tutorial: the classic 101 is for use with a physical device, while 101E is an alternative for the HoloLens Emulator.

In my case I had to use the standard 101 version as I’m currently running a mix of Windows 7, 8 and 8.1 on my various PCs and the HoloLens Emulator only works with Windows 10. I could upgrade to Windows 10 – or use it in a Hyper-V VM, I suppose – but as it hasn’t yet officially been rolled out within Autodesk – and I now have access to a physical HoloLens device – I’ve decided to forgoe that, for now.

The tutorial is well-structured and straightforward to follow. So far I’ve only got as far as creating the first, basic app – with some Unity assets provided with the tutorial – but this “quick win” felt really good (it’s this same feeling we aimed for with the My First Plug-In series, back in the day). Later on I’ll be adding gaze, gesture, voice & spatial mapping support, but that’s for another day.

Rather than stick with the standard Unity assets from the tutorial, I decided to integrate something more relevant to an event I’m helping organise…

Later this year Autodesk will be celebrating 25 years in Switzerland. We’re going to be holding a Design Night in the Neuchatel area, and the current thinking is to have a robotics theme – given the history of the region, and the fact the first “robots” were created here in the late 18th century. The plan is to get a number of robots in for the event – we’re busy speaking to various vendors and collaborators on that front – but I’d also like to have a virtual, robotic exhibit that’s only experienced by people wearing HoloLens devices.

So, with that in mind, I decided to see how it would work with a very basic robot arm. Luckily there’s one available on the Unity asset store. This is really just a first step – I’m in contact with a Tom Eriksson, a Fusion 360 aficionado in Sweden, about a project he’s created that works really nicely in Unity. With Tom’s help I expect to be able to create something much more fun.

Anyway, here’s a quick screenshot (maybe that should be holoshot?) of the basic application in action: 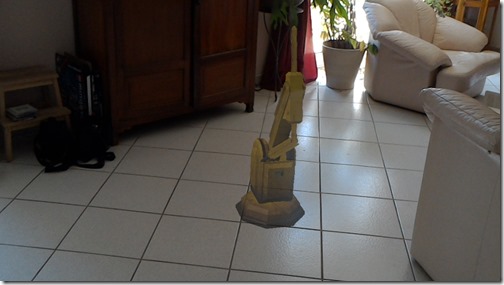 And here’s a video, so you can see and hear the animation (although the sound isn’t yet spatial).

The robot arm isn’t perfectly aligned with the floor, but it’s a good enough start.