Now that the dust has finally settled on Autodesk University 2015, I thought I’d write a couple of posts about some fun I had on Wednesday and Thursday.

At this year’s event I had classes to deliver on both Tuesday and Wednesday mornings (at 8am and 10am, respectively). This is probably due to the fact I’d requested 90-minute timeslots and they quite sensibly schedule the longer sessions before noon and shorter sessions after it. Which all makes perfect sense. But it also meant that I didn’t “let my hair down” properly until Wednesday night, by which point I’d finished my various classes and panel sessions. After attending another couple of events, earlier in the evening, by the time I’d made my way to the not-to-be-missed Blogger Social, I was already a little merry. You can see it in my eyes.

It was, of course, a lot of fun hanging out with fellow CAD bloggers for a couple of hours. I managed to catch up with Owen Wengerd, who is having an interesting time contracting on BricsCAD. You can see him here below: he won a pair of R14 flip-flops by answering Shaan’s question of which AutoCAD version first had LISP (2.18). I cheekily suggested he clone them and wear those instead (ho snap!). 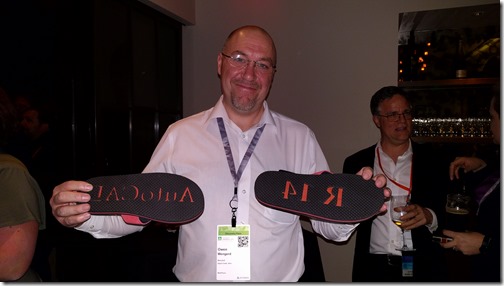 You can see Bob Bell in the background. He also made it into the following photo, sporting a rather realistic-looking light-sabre: 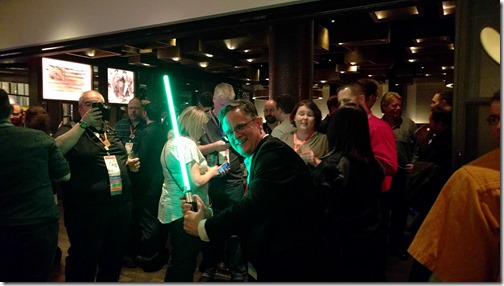 After the Blogger event finished I bumped into Peter Schlipf from ADN, Frank Prekwinkel from imos and members of Tech Soft 3D. Which led to a few more drinks and me somehow sitting down for a chat in the Bourbon Room with Shaan Hurley. Who didn’t, it turns out, have a balloon attached to his head at the time. 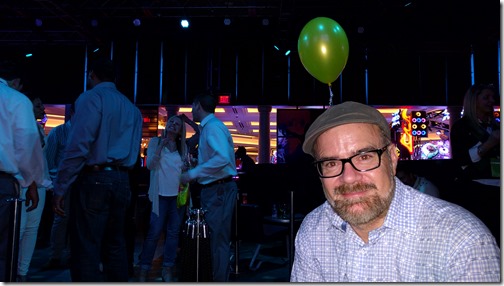 Shaan was about to head off to grab a few hours’ kip before the 5:45am meet for his now-institutional AU morning run. I have no idea how (or why) he managed this heroic feat.

My own efforts to wake up were rather less successful. Much to my annoyance I slept through Scott McFarlane’s Thursday 8am class. As well as being both extremely nice and highly skilled, Scott has the rare distinction of having attended every single AU held on US soil during the last 23 years. And this was probably his last AU class, as he’s leaving the Autodesk community to work for a financial services company. Argh. Hopefully his class will have been recorded (although that’s really not the point). All the best for your new gig, Scott!

After checking out of the hotel, I then spent most of Thursday in the Exhibit Hall, which certainly deserves its own post. More on that tomorrow.