« My first Autodesk 360 viewer sample | Main | Our holiday on Andros »

The need for autonomous drone navigation

My Quanum Nova arrived from Hong Kong, yesterday. I’d just been tracking the parcel’s progress when the doorbell rang and the postman handed it to me: he seemed surprised I didn’t mind paying the additional SFr 47 customs fee (on top of the $299 price-tag and what I had to pay for batteries) and even let him keep the change. I was in that good a mood. ;-) 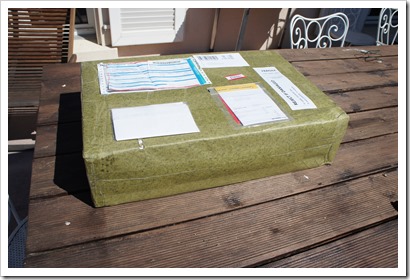 Reality gradually set in as I assembled the device, although that was pretty straightforward, overall. The assembly instructions were better than expected, and I was soon able to turn the device on (I’d charged all four of my 2700mAh li-poly batteries in the weeks I’d been waiting for the drone to show up, so I was locked and loaded… interestingly enough, the day before the drone arrived I received a notification that higher-capacity batteries are now available, too). 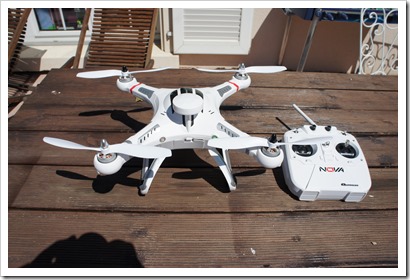 Unfortunately the instructions for getting the drone’s motors to disarm were much less useable. In theory I was meant to use the left thumbstick on the controller – pushing it down to the bottom-right – to arm the motors. But try as I might I couldn’t get this to work. I wasn’t even sure whether the transmitter was working to control the drone, I really couldn’t get it to respond in any way.

Eventually I decided to connect it up to my PC and see if I could get anything to work using APM Planner 2.0. I was able to connect to the device – as it contains an ArduCopter-compatible board, an Arduino Mega 2560 – and could use APM Planner to adjust some options. Out of desperation – although I’d seen a few people on the forums had done this, themselves – I upgraded the ArduCopter firmware to v3.1.5. 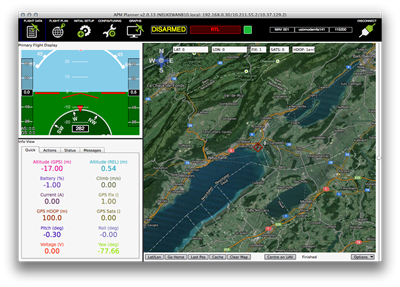 This worked, but didn’t help address the connection problem. I then went and re-calibrated the radio – which allowed me to at least see that the controller was indeed connecting to the drone. This calibration did allow the motors to arm: you can imagine my surprise when this happened in my living room (yes, with the propellers attached… who thinks to remove them when there’s every chance your drone’s a dud?) and nearly got tangled up with the USB tether attaching it to my PC. 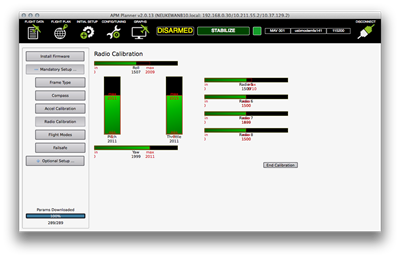 Anyway, at least I knew my drone was functional, at this stage, and that I actually had to hold the right thumbstick downwards, too, for the motors to arm. The instructions could really use having this additional nugget of information provided, but hey.

The next thing I did was – of course – head outside and try an actual flight. First, though, I attached my GoPro-equivalent camera, my CamOne Infinity, to the bottom of the Nova with the provided mount. As far as I’m aware, Photo on ReCap 360 won’t work with stills coming from the Infinity, but this was more to capture the event than to provide data for a 3D reconstruction.

I’m glad I did: the results were hilarious. The drone took off fairly steadily, but I then made the rookie move of switching to what I thought was a stabilized flying mode but ended up sending the drone skywards at high speed. I panicked, tried to adjust and brought the drone back down to earth with a thump. This dislodged the camera, which stayed in the grass filming the departure of the drone as it now – with much less weight – looped back up into the air and crashed elsewhere in the garden.

Here’s the video of the event – I’ve blurred the faces to protect the privacy of a family member, which I’m actually glad has also obscured the look on my face as most of this was playing out.


The drone is, incredibly, largely intact. The upper side of two of the arms have cracked – as has the GPS tower on top – but nothing that can’t be held together with tape. I can’t help feeling that – despite any sense of personal ineptness – this is a fairly typical experience for first-time drone pilots. For me, though, it underscores two things: 1) I did well to start off with a $300 drone and 2) I really need to get to the point where software is taking care of an increasing amount of the navigation effort. If I’d wanted to be a pilot I would have chosen another career, after all. :-)

I’m heading off to Greece on Sunday for a couple of weeks, so it’ll be some time before I blog again. I’ll hopefully be able to tweet once or twice from the beach, but I’m planning to make this a proper break to be with the family. When I get back I’m hoping to spend a bit more time with the Nova, and perhaps even to start working with the new 3DR X8 that our office has just bought, too, which should work really well with the new “one button 3D capture” DroidPlanner functionality.