Computer Science Education Week kicks off in the US

Back in March, I signed up via Code.org to see if I could get help teach basic programming skills to kids. It didn’t work out mainly because of my location – Code.org is really focused on the US – but I stayed on their mailing list and have been following their updates with great interest.

For those of you who are not familiar with Code.org, it’s a resource that’s been established to promote computer science education for students. A great example of what’s being provided is the Hour of Code, which has been put together for this week’s Computer Science Education Week (Dec 9-15, 2013).

I’ve been trying out this very well-executed tutorial at home with my older two children. The early coding tasks – those that form the basis of the “Hour of Code” tutorial most appropriate for my kids, there are a number of others, too – use Angry Birds (which really resonated well with my kids) and Plants vs. Zombies (which didn’t as much) and were interlaced with videos of Bill Gates and Mark Zuckerberg (neither of whom they recognised, but anyway).

The goal was to generate basic maze solving algorithms, putting them together using an embedded editor that allows you to drag & drop the various operations into place: 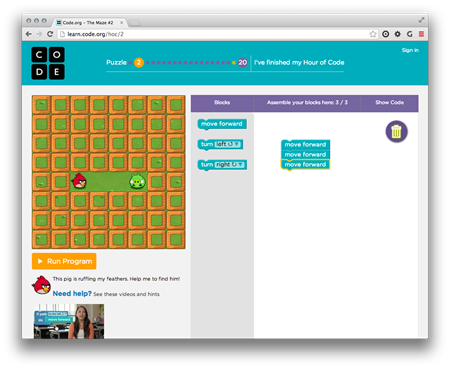 In the later stages, the composed operations ended up being quite complex: by the end of the exercise, my kids had a decent understanding of conditional statements and loops, for instance. 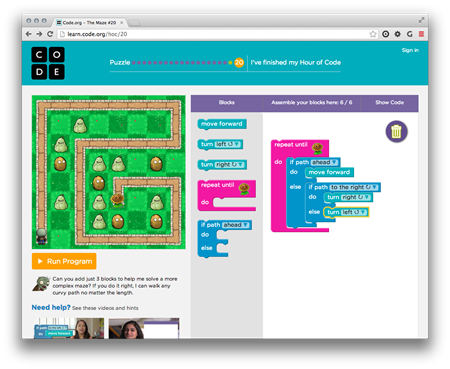 Although the provided “code-behind” was still a bit complicated for them, syntactically-speaking: 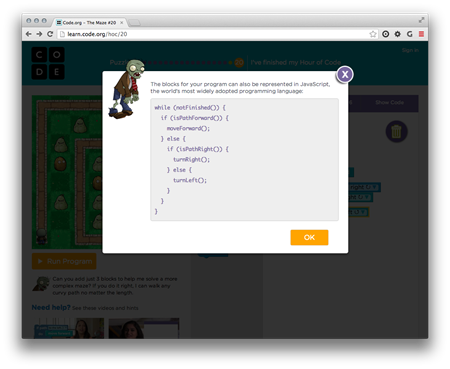 I definitely found it to be a worthwhile exercise, and I certainly recommend taking a look. My kids certainly came away with a better understanding of what I do for a living, which can only be a good thing.

To follow up on this, I’ve gone and bought them a Swiss-designed Thymio II programmable robot for us all to have some fun with over the holiday period:

It looks like a lot of fun – can’t wait to see what they come up with!