Despite having worked for some time with a number of language features previewed for VS2008 and properly released in VS2010 (F# being a prime example), I’ve finally gotten around to installing VS2010 as my main .NET code development environment.

To make sure I could get code across properly into my blog, I was able to get my favourite source code copying tool, CopySourceAsHTML, working in Visual Studio 2010.

And thanks to tips from Ewen Wallace and Scott McFarlane, I upgraded my use of RockScroll to switch across to AllMargins (which includes the particularly handy OverviewMargin tool, as seen at the right of the below VS2010 screenshot). 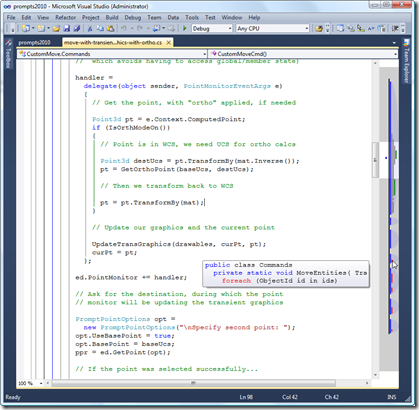 Owen Wengerd has recommended installing Daffodil, which enables VS2010 to multi-target VS versions prior to 2008. VS2010 can use VS2008 to build apps for AutoCAD 2010 & 2011, as long as you have VS2008 installed, but Daffodil apparently allows you to build C++ applications using prior versions of Visual Studio, and therefore build ObjectARX applications for prior versions of AutoCAD. I very rarely have to do any C++ coding, these days – especially not for older AutoCAD versions – but I’ll file that one away until it’s needed (thanks, Owen! :-).